What's the difference between the labelling Gluten and Low Gluten?

This recipe makes a 750g loaf in a bread machine 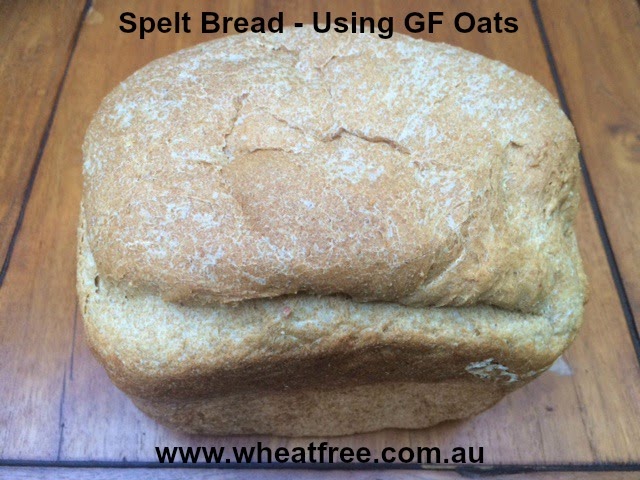 Select the basic bread cycle for a 750g loaf size
Choose your choice for the colour of the crust
Order your GF Oats here
at 30.4.15 No comments:

All oats are created (pretty much) equal.  Oats are one of the few foods that don’t lose nutritional value

through processing.  Steel cut and rolled oats contain a little more fibre that instant, Instant oats are a better option for babies or anyone with digestive sensitivities so will keep you fuller for longer.

Oats are a valuable grain to add to your diet -- so important in fact, they've been named a superfood. Oats contain manganese, a mineral that helps bone formation. Just one cup of oats gives you 70% of your daily manganese dose. Along with that come healthy helpings of vitamin B1 and magnesium. The fibre content of oats helps regulate your blood sugar, keeping you full and satisfied for longer periods of time. And that's not all; the fibre in oats can also help your cholesterol.
In a review of several studies on oatmeal’s benefits, published in the American Journal of Lifestyle Medicine, the data concludes that the soluble fibre in oats does indeed lower cholesterol and contains properties that bolster cardiovascular health.

Other oatmeal benefits mentioned in the study include:
Preventing oxidation of arteries
Curbing weight gain
Preventing type 2 diabetes
Bolstering the immune system
From helping ward off cancer to regulating your digestive system, from reducing hypertension to helping with weight loss, oats are a real wonder-food.

ROLLED
De-husked, steamed and flattened groats
Ideal all round purpose

Email ThisBlogThis!Share to TwitterShare to FacebookShare to Pinterest
Labels: GF Oats in your diet

When to Start Feeding Babies Oats?