How has Wheat changed over the centuries 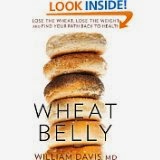 undigestiable product we consume in the 21st Century.  Which explains many of the problems that people are facing when consuming wheat on a regular basis. Not to mention it is a cheap commodity and is used in everything we purchase that is processed.  It is high in gluten and also provides consumers with a superior taste and texture to other products made with alternative flours.

William Davis explains in his book:
Over most of the ten thousand years that wheat has occupied a prominent place in the caves, huts, adobes, and on the tables of humans, what started out as harvested einkorn, then emmer, followed by cultivated Triticum aestivum, changed gradually and only in small fits and starts. The wheat of the seventeenth century was the wheat of the eighteenth century, which in turn was much the same as the wheat of the nineteenth century and the first half of the twentieth century. Riding your oxcart through the countryside during any of these centuries, you’d see fields of four-foot-tall “amber waves of grain” swaying in the breeze. Crude human wheat breeding efforts yielded hit-and-miss, year-over-year incremental modifications, some successful, most not, and even a discerning eye would be hard pressed to tell the difference between the wheat of early twentieth century farming from its many centuries of predecessors.
During the nineteenth and early twentieth centuries, as in many preceding centuries, wheat changed little. The Pillsbury’s Best XXXX flour my grandmother used to make her famous sour cream muffins in 1940 was little different from the flour of her great-great-grandmother sixty years earlier or, for that matter, from that of her great-great-great-great-great-great-grandmother another two centuries before that. Grinding of wheat had become more mechanized in the twentieth century, yielding finer flour on a larger scale, but the basic composition of the flour remained much the same.
That all ended in the latter part of the twentieth century, when an upheaval in hybridization methods transformed this grain. What now passes for wheat has changed, not through the forces of drought or disease or a Darwinian scramble for survival, but through human intervention. As a result, wheat has undergone a more drastic transformation than Joan Rivers, stretched, sewed, cut, and stitched back together to yield something entirely unique, nearly unrecognizable compared to the original and yet still called by the same name: wheat.
Modern commercial wheat production has been intent on enhancing features such as increased yield, decreased production costs, and large-scale delivery of a consistent commodity product. All the while, virtually no questions have been asked about whether these features are compatible with human health. I submit that, somewhere along the way during wheat’s history, perhaps five thousand years ago but more likely fifty years ago, wheat changed.
The result: A loaf of bread, biscuit, or pancake of today is different than its counterpart of a thousand years ago, different even from what our grandmothers made. They might look the same, even taste much the same, but there are biochemical differences. Small changes in wheat protein structure can spell the difference between a devastating immune response to wheat protein versus no immune response at all.
To find out more about Wheat Belly - Click Here
at 11.11.13