Our website can help you with your ongoing wheat free and gluten free dietary purchases. Over 5000 people Australia wide use our website to help them with their ongoing dietary programs and purchases of wheat free products where Wheat Free or Gluten intolerant dietary regimes are needed.


Our Oats are one of the keys to our success. It is not permissible by law to use the words Gluten Free when referring to any oats sold in Australia. Yet our purity is second to none. Please click here to see why and where and how our oats are prepared.


We have deliberately positioned our website to offer only Wheat Free and Gluten Free products and associated services as regrettably more and more people are realising that a wheat free diet or gluten free diet can help them in better health.


It can happen at any stage in life.


Like many illnesses or diseases (Coeliacs Disease being the most extreme for gluten intolerances) can happen at any stage in life requiring in some cases a complete change in how we manage our diets for life. The move to a wheat free diet seems to be happening more often as our population’s worldwide age. Many report a significant change in their way of life.


Our wheat free and gluten free products website attracts more followers each day with customers using us for our quality, range and speedy delivery and ease of purchase.


Please join our community to keep up to date with our Weekly Deals sent out each Monday.
at 13.6.12 No comments:

Wheat free Diet: It is not the end of the world 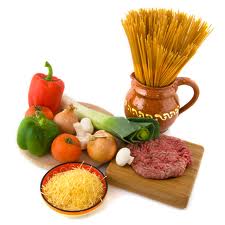 “Wheat free flours that are suitable on wheat free diet”


To manage the symptoms of wheat allergy you have to avoid wheat in all forms. Nowadays there is no dearth of wheat free food products in the market. Therefore, wheat free living is very easy to achieve. It involves substituting wheat containing foods with wheat free foods which are both delicious and readily available.


For individuals suffering wheat allergy, there are various wheat free flour options available to choose from.


Flours which can be used as an alternative to wheat flours in cooking are:


Rice flour: One of the very first flours which comes to mind when you want wheat free living is rice flour both white rice flour and brown rice flour. It is easily available and has a neutral flavour. It is an ideal wheat free substitute which can be utilized to thicken sauces, to make batters for coating meat and to make flatbreads.


Millet flour: Another preferred option for wheat free living, millet flour can be used to thicken sauces and to coat meats.


Corn flour: Corn flour is also a good alternative to wheat flour and can be used for thickening and dredging.


Flours from legumes: Flours made from legumes such as fava, soy etc are very commonly used in preparing wheat free foods. These wheat free flours are high in protein content and can be used in baking.


Barley and Rye flour: Barley and rye flour contain some content of gluten, however, can be used by individuals with wheat allergy. Hence both of them can be used to prepare wheat free food.


Wheat free living may sound difficult but with scores of alternatives available it can in fact become a healthy way of living. Be on a lookout for wheat free products such as cakes, biscuits, bread etc which are made from flours described above or cook your own wheat free meal.  It just takes some imagination and a little bit of extra effort to live wheat free.

The recent scientific and clinical advances in coeliac disease research have been summarised in a review published in the journal Current Opinion in Gastroenterology.

Epidemiological studies have shown that coeliac disease is as common in parts of Asia, Africa and Eastern Europe as it is in the Western world. Large population-based studies have expanded knowledge of the long-term risks of coeliac disease, which no longer includes infertility (once a gluten free diet is established), and explored relationships with concomitant autoimmune diseases such as type 1 diabetes and microscopic colitis.

A particularly interesting finding is that vitamin A supplementation can actually worsen the inflammatory response in people with coeliac disease, while there is some evidence to suggest vitamin C may be beneficial.

In terms of advances in coeliac disease treatment, the‘gold-standard’ remains lifelong adherence to a strict gluten-free diet. However, there is continuing work on other therapeutic options including vaccinations, oral enzyme supplements and inhibitors of the gliadin antigen. At the same time, research is being conducted on new varieties of oats and barley that are better tolerated by those sensitive to gluten and new wheat varieties with minimal gliadin content are also being studied. Some work in this field has shown the gliadin content of regular bread can be reduced by 85% while maintaining baking quality.

To find products that suit if you are following a gluten free diet go to Wheatfree.com.au


Method:
Beat the eggs slightly in a bowl and add the rest of the ingredients. Blend all together , mixture should be sticky enough to hold its shape as small balls which you place on a baking paper lined tray 3-4cm apart.  Bake at 150oC until golden brown. (approx 12-15mins)


Store in an airtight jar for a delicious daily treat - or give them to the kiddies in their lunch box if you must. 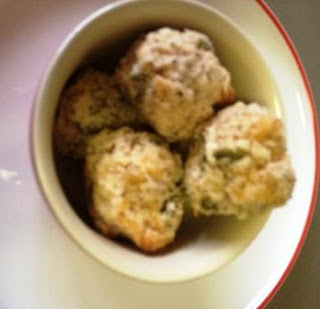 
I cheated and used a commercial popcorn maker, which I personally recommend, had it for years, wouldn't be without it.  Even the big kids love it when it comes out.  Folk it is the small things in life that matter the most.


Heat up your pan
Add about 2 tspns of coconut oil.
Add in your corn and let them pop away.


Once you have enough, add to your pan a couple of tablespoons of coconut oil to melt - try to avoid melting the coconut in the microwave.


Drizzle the coconut oil over your popcorn, sprinkle with Himalayan Salt or Icing Sugar and you have a delicious treat for young or old. 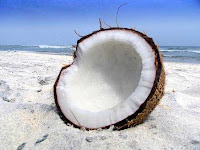 Over the last couple of years I have started experimenting and introducing coconut oil into our diets.  I can't believe how nutritious this fruit can be from the inside out.

The Coconut is highly nutritious and incredibly rich in fibre, vitamins, and minerals. It is classified as a "functional food" because it provides many health benefits beyond its nutritional content. Coconut oil is of special interest because it possesses healing properties far beyond that of any other dietary oil and is extensively used in traditional medicine among Asian and Pacific populations. Pacific Islanders consider coconut oil to be the cure for all illness. The coconut palm is so highly valued by them as both a source of food and medicine that it is called "The Tree of Life." Only recently has modern medical science unlocked the secrets to coconut's amazing healing powers.
While coconut possesses many health benefits due to its fibre and nutritional content, it's the oil that makes it a truly remarkable food and medicine.

Once mistakenly believed to be unhealthy because of its high saturated fat content, it is now known that the fat in coconut oil is a unique and different from most all other fats and possesses many health giving properties. It is now gaining long overdue recognition as a nutritious health food.

Coconut oil has been described as "the healthiest oil on earth." That's quite a remarkable statement. What makes coconut oil so good? What makes it different from all other oils, especially other saturated fats?

The difference is in the fat molecule. All fats and oils are composed of molecules called fatty acids.
The vast majority of fats and oils in our diets, whether they are saturated or unsaturated come from animals or plants and are composed of long-chain fatty acids (LCFA).
Both the saturated and unsaturated fat found in meat, milk, eggs, and plants (including most all vegetable oils) are composed of these LCFA.
MCFA (Medium Chain Fatty Acids) are very different from LCFA. They do not have a negative effect on cholesterol and in fact help to protect against heart disease. MCFA help to lower the risk of both atherosclerosis and heart disease. It is primarily due to the MCFA in coconut oil that makes it so special and so beneficial.

Modern medical science is now confirming the use of coconut in treating many of the above conditions. Published studies in medical journals show that coconut, in one form or another, may provide a wide range of health benefits. Some of these are summarized below:
·     Kills viruses that cause influenza, herpes, measles, hepatitis C, SARS, AIDS, and other illnesses.
·     Kills bacteria that cause ulcers, throat infections, urinary tract infections, gum disease and cavities, pneumonia, and gonorrhea, and other diseases.
·     Kills fungi and yeasts that cause candidiasis, ringworm, athlete's foot, thrush, diaper rash, and other infections.
·     Expels or kills tapeworms, lice, giardia, and other parasites.
·     Provides a nutritional source of quick energy.
·     Boosts energy and endurance, enhancing physical and athletic performance.
·     Improves digestion and absorption of other nutrients including vitamins, minerals, and amino acids.
·     Improves insulin secretion and utilization of blood glucose.
·     Relieves stress on pancreas and enzyme systems of the body.
·     Reduces symptoms associated with pancreatitis.
·     Helps relieve symptoms and reduce health risks associated with diabetes.
·     Reduces problems associated with malabsorption syndrome and cystic fibrosis.
·     Improves calcium and magnesium absorption and supports the development of strong bones and teeth.
·     Helps protect against osteoporosis.
·     Helps relieve symptoms associated with gallbladder disease.
·     Relieves symptoms associated with Crohn's disease, ulcerative colitis, and stomach ulcers.
·     Improves digestion and bowel function.
·     Relieves pain and irritation caused by hemorrhoids.
·     Reduces inflammation.
·     Supports tissue healing and repair.
·     Supports and aids immune system function.
·     Helps protect the body from breast, colon, and other cancers.
·     Is heart healthy; improves cholesterol ratio reducing risk of heart disease.
·     Protects arteries from injury that causes atherosclerosis and thus protects against heart disease.
·     Helps prevent periodontal disease and tooth decay.
·     Functions as a protective antioxidant.
·     Helps to protect the body from harmful free radicals that promote premature aging and degenerative disease.
·     Does not deplete the body's antioxidant reserves like other oils do.
·     Improves utilization of essential fatty acids and protects them from oxidation.
·     Helps relieve symptoms associated with chronic fatigue syndrome.
·     Relieves symptoms associated with benign prostatic hyperplasia (prostate enlargement).
·     Reduces epileptic seizures.
·     Helps protect against kidney disease and bladder infections.
·     Dissolves kidney stones.
·     Helps prevent liver disease.
·     Is lower in calories than all other fats.
·     Supports thyroid function.
·     Promotes loss of excess weight by increasing metabolic rate.
·     Is utilized by the body to produce energy in preference to being stored as body fat like other dietary fats.
·     Helps prevent obesity and overweight problems.
·     Applied topically helps to form a chemical barrier on the skin to ward of infection.
·     Reduces symptoms associated the psoriasis, eczema, and dermatitis.
·     Supports the natural chemical balance of the skin.
·     Softens skin and helps relieve dryness and flaking.
·     Prevents wrinkles, sagging skin, and age spots.
·     Promotes healthy looking hair and complexion.
·     Provides protection from damaging effects of ultraviolet radiation from the sun.
·     Helps control dandruff.
·     Does not form harmful by-products when heated to normal cooking temperature like other vegetable oils do.
·     Has no harmful or discomforting side effects.
·     Is completely non-toxic to humans.

No pantry should be with this, check out my Recipes Tab for some easy ideas.
For more information -
http://www.organicfacts.net/organic-oils/organic-coconut-oil/health-benefits-of-coconut-oil.html